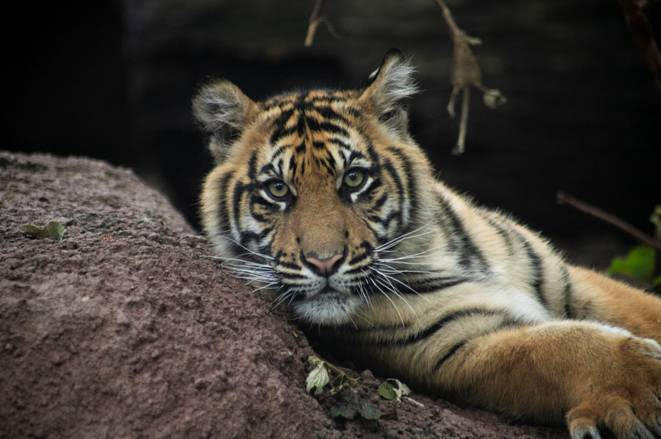 Every pint, half pint, growler, squealer and keg of Blind Tiger’s Tiger Bite IPA helps provide support to the Sumatran Tigers at the Topeka Zoo. The sponsorship program, “Buy a Beer – Save a Tiger” has been a partnership between The Blind Tiger Brewery + Restaurant and The Topeka Zoo and Conservation Center for over 15 years.

According to Blind Tiger’s press release, “The Topeka Zoo and Conservation Center has been and continues to be extremely successful with the Sumatran Tiger program with one litter of three cubs born in 2014 and a second litter of four cubs born in mid-October, 2018. The Topeka Zoo has a beautiful large habitat and a superb zoo staff who do a great job of caring for the tigers. Mom, Dad and the four cubs can be seen at the Topeka Zoo every day.”

Also working to preserve the existing natural environment for the wild Sumatran Tigers and to prevent poaching is Badar, a Sumatra ranger. A portion of the sponsorship that comes from every glass of Tiger Bite IPA goes to fund this employee, who was publicly thanked for his hard work when Topeka Zoo named one of the newest cubs in his honor.

“It is one of the most satisfying community support efforts that we are involved in,” said Jay Ives, owner of the Blind Tiger Brewery. “The great staff at the Topeka Zoo does such a great job taking care of the tigers and preserving the species. We are proud to be a small part of that effort.”

About the Blind Tiger Brewery:

The Blind Tiger Brewery + Restaurant, established May 1, 1995, is the oldest and largest of the five local craft breweries in Topeka. Last year, they brewed 1,482 barrels of beer, which is equivalent to 367,536 glasses of beer.

Stop by Blind Tiger Brewery on any given day and sample up to 20 craft beers on tap and enjoy their fresh and local cuisine. That’s why they say “Beer Brewed for Every Mood” and hold multiple World Beer Cup awards.