The Blind Tiger Brewery + Restaurant announces three beautiful new Craft Beers ready and on tap as of Tuesday, January 21. These beauts join the other 20-some beers on tap at the brewery, but they won’t last long. Each are single one-off batched brews, meaning that they’ll be on tap at The Blind Tiger until Topeka drinks ’em up.

A golden colored beer with all the attributes of a Café Mocha. The sweet body is formed from cacao, Tahitian vanilla beans from locally owned Moburt’s Spice Shop and milk sugar. Next, brewmaster John Dean and his team roast coffee beans from El Salvador, Guatemala, and Honduras. Like it’s muse, the Café Mocha beer is one to be savored; whipped cream optional.

A kettle-soured beer with passion fruit puree, the Passion Fruit Sour joins Blind Tiger’s sour beer series, which has grown over the past two years. This lover, however, is much smoother then previous.

She was a black charred beauty with big dark staves, and bands all her own hugging way up high, way up firm and high. I knew this Makers Mark Bourbon Whiskey barrel needed filled. It would take a full year workin’ on mysteries without any clues. Workin’ on some infusion. I awoke last night to the sound of thunder, is it ready I sat and wondered? You be the judge. 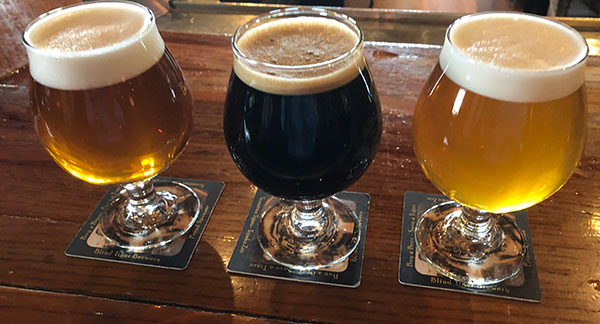 The Blind Tiger Brewery + Restaurant is one of five local craft breweries, but is the largest and oldest in the city. According to owner Jay Ives, The Blind Tiger was the first brewery in Topeka after prohibition and the restaurant serves 700 meals daily.

With gold, silver and bronze beer competition medals a plenty, The Blind Tiger is recognized around the world for their brewing excellence   “We are blessed with an amazingly talented and creative Brewmaster named John Dean, and with Alvaro Canizales, our hard working, talented Head Brewer,” said Jay. “These two guys truly know how to brew world class beer, and they show it every day. John has built a great team dedicated to top quality beer and excellence in everything they do, and it shows in every glass of Blind Tiger Beer.”

The Blind Tiger Brewery + Restaurant has an average of 20 varietals on tap daily, ranging form light to dark, mild to strong, and malty to hoppy – hints their slogan “Beer Brewed for Every Mood.”