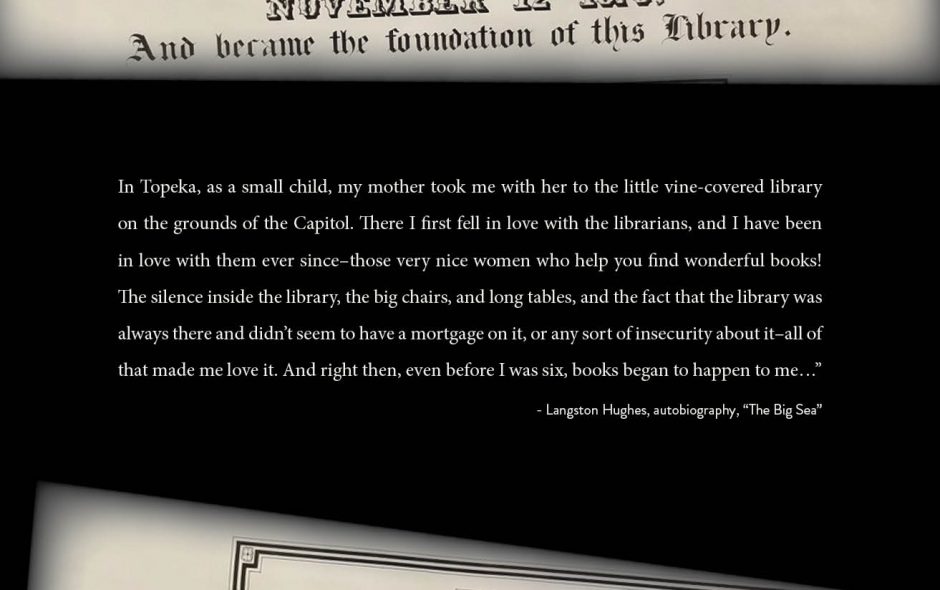 The leading ladies of the library,  a story that began 150 years ago.

Issues of professional equity, services to women among the general public, and the importance of preserving the history and writings of women, themselves, have long been pillars of focus in librarianship, since… the 1970s, when feminist activism, particularly in relation to American libraries, brought issues of gender inequality strongly to the fore. Perhaps the Progressive Era, which saw the number of library positions more than triple during the first two decades of the 20th Century, offering women opportunities for economic independence. Or as early as 1882 when this advocacy was documented describing a “women’s meeting” at the 14th American Library Association Conference.

I’m uncertain if Noah McFarland, Ellan Tweeddale or Harrison Charlson attended said conference or “women’s meeting,” I presume not, staying home in Topeka to ensure that their “Ladies’ Library Association” doors were open that Saturday afternoon, from 3 to 6p, as they had for the past decade.

Kansas’ history swells with progressive thinkers and adopters of changes for the betterment of personhood, sometimes well before the rest of the country Myriads of stories and folklore make an irrefutable case that library leaders were among, perhaps catalysts for change, thus strengthening progressive spines. Yet there is a great gap created by the failure of historians, so far, to make a systematic analysis of the part played by women’s associations in creating public libraries and filling library leadership roles, according to Anne Firor Scott. In Scott’s Abstract for “The Journal of Library History” (1974-1987, Vol. 21, No. 2, Spring 1896) she further claims  “perhaps 75 percent of such libraries were initiated by women’s groups, often originally for their own use. Close study of this phenomenon would reveal a good deal about the growth of self-education and adult education as significant aspects of American culture.”

Indeed, Scott’s portrait of the early days of libraries is anything but abstract here in Topeka.

November 3, 1870 the “Daily Commonwealth” newspaper describes the desire of the men’s military group, the Grand Army of the Republic of Topeka Post No. 2, to start a library:

Let us have a place where young men can spend their evenings in reading or social amusements that will tend to improve the mind, and help keep them from saloons and other places of vice.

November 5, 1870 the newspaper prints a brief announcement about another library project proposed by some of the ladies:

All ladies interested in forming a “Ladies’ Library Association” in this city are requested to meet at the residence of Mrs. T.L. King, corner of 8th and Monroe streets….

The attempts by the G.A.R. Post No. 2 failed, as had two previous attempts by men’s organizations. The Ladies’ Library Association was officially organized with McFarland, Spencer and King as executive officers. The historic meeting in which the committee prepared their constitution and bylaws took place in a second floor lodge room over the J.W. Davis Dry Good Store, on the east side of Kansas Ave, between 7 and 8 streets. December 10, 1870 the newspaper reported the following:

The all-important committee charged with the selection and purchase of the association’s initial stock of books, was announced …

LLA would spend the next four months recruiting members, who were assessed $3 a year, and pore over catalogues selecting the library’s initial stock of 150 volumes, works “suitable for the ladies’ library.” The 50 members of the LLA would be notified that their very own library would open on Saturday afternoon, March 11, 1871, for three hours and on Saturday afternoons thereafter, from 3 to 6p.

From those early days to present, our library has moved, rebuilt, expanded, and expanded. The impetus and commitment, to being a place of learning and providing equal access to all, has not shifted and stays true in hearts and minds today, perhaps more so than ever.

If adaptable and steadfast are qualities of leaders, then the women who have led TSCPL over the past 150 years are the ultimate personification.

In 1885, just two years after the new library building opened on Capitol Square, an attempt was made to burn it down. The newspaper reported,

“The attempt was a bold and a uselessly wicked one, as no one could be benefited by the destruction of the library…If the would-be incendiary could be found, and the proof against him were strong, there would be little chance of his encumbering this sphere very much longer.”

In 1925 Governor Ben Paulen, acting for a legislative commission, served notice on the library to vacate statehouse grounds, their home for the past 42 years. Plans for a new site and building, with voter approval, got underway. The vote failed, and the library remained on statehouse grounds. That year, the library had 15,000 borrowers and a yearly circulation of 135,656 books. The library wouldn’t move to her present location until December 14, 1953 – after an overwhelming majority vote in April of ’47 approved a bond issue for $650,000 for construction of a new building. (Controversy arose when deciding the new library grounds, with some unhappy about the 10th and Washburn location, stating they felt it was just too far away from downtown, and people would not want to go “way out there” to visit the library.)

A branch library system was established in cooperation with the Topeka school system in 1918. By 1932 there were branches at Curtis and Holliday junior high schools and Washington, Lafayette, Randolph and Gage elementary schools. Ten years later, due to lack of funds and the inability of the board of education to help with expenses, the branch libraries were forced to close.

What did the library do? It hit the road, that following year, in a Chevrolet coupe and converted horse trailer, becoming the first traveling library branch. The inside walls of the trailer were lined with shelves that could hold 1,200 books; at the front was an L-shaped desk for the librarian and cupboards for supplies. The trailer was heated with a kerosene stove and there were colorful curtains at the windows. The library on wheels made 10 stops each week. It was an unqualified success.

Innovation continued when librarian Anna Muller announced a new list of can do’s at the library in 1946.

Want to bring Fido along? That’s just fine, as long as he is well behaved. “…if he gets to cutting up, out he goes.” Want to bring your typewriter? Come ahead, there’s a special room in the reference area which makes an ideal spot for writing. Renew books by phone? You bet you can, call and it will be done. “And, last but not least, …you can leave your children at the Mulvane children’s branch…while mama goes downtown on a shopping spree.” Modern changes for the modern age!

In 2016, the Topeka + Shawnee County Public Library was named “Library of the Year in the U.S. and Canada” by “Library Journal.” Today, the Library has a collection of more than 450,000 items and serves nearly 100,000 registered borrowers each year. Approximately 3,000 people walk through the front doors daily. Bookmobiles make 25 stops, six days a week, across the county. The Library provides services to 40 senior living facilities and 130 homebound individuals. The Digital Branch serves customers’ needs 24/7. The recently renovated Alice C. Sabatini Gallery will reopen in spring, the Millennium Café serves hundreds, most recently under new leadership from Engroff’s Catering. Chandler Booktique, a used bookstore, fills a literary void. A multitude of meeting rooms are accessible to card holders, for free, in addition to computer training and internet access. All of this, still located in the heart of the city, from the hearts of some amazing women, who most certainly rock. Thank you.