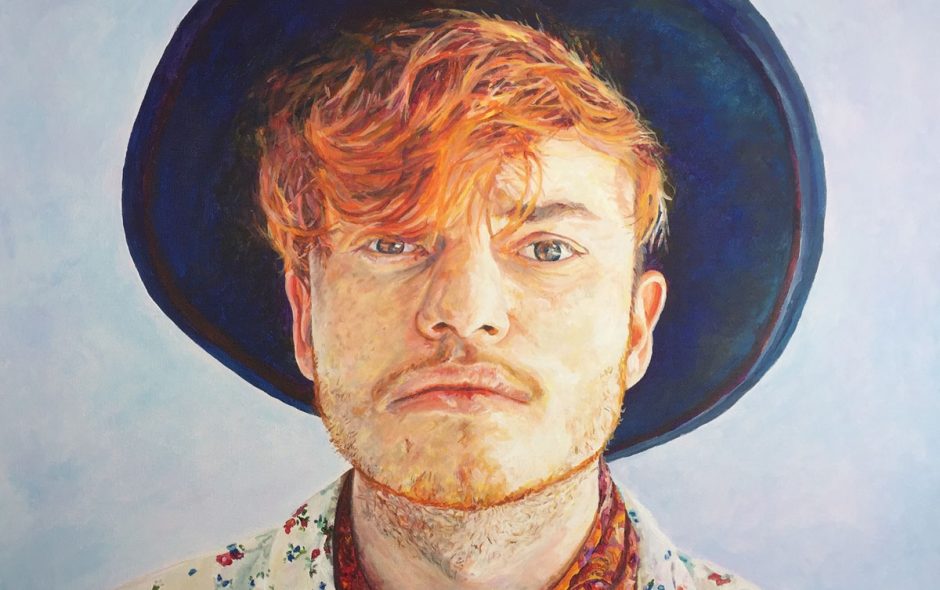 Jacob Buchanan, Light Catcher, Inspires me to capture light and life in a new modern way.

Like the rest of us, COVID-19 handed artist Becky Drager A lot of lemons. Galleries closed, her art shows canceled and in the midst of quarantine Drager wondered what she would do to keep occupied in a positive way. She decided that she had “the gift of time,” and she started painting.

“I was isolated from my friends and family. So how could I be with them? That is when I came up with the idea to paint portraits of people,” Drager noted. In a time of such negativity Drager decided to think of local Topeka people that inspired her. On April 1, 2020, she began her first painting- a portrait of Carrie Riordan, entitled “Woman of the World.”

Drager became invested in the project: “I painted on bigger canvases than I usually do. I wasn’t doing this project for resale necessarily, so I felt safe in painting really big. These people deserved the recognition that a big painting demands.”

Despite her passion for the project, Drager kept it a secret. “I wanted to see where it went. I didn’t want any expectations. I was doing it totally for myself…” In deciding who to paint, Drager made a list that she admits was “pretty long.” She then began looking through photos of those people that inspired her. She focused on a diverse group of individuals- different genders, ages, race, etc. She gave herself a deadline and got to work.

Drager’s portraits span the breadth and width of Topeka. She chose Tina Williams, from Washburn University’s Office of International Programs, because, “she was given an opportunity to find a new journey with joy.”

She decided on a portrait of fellow artist Barbara Waterman-Peters because, “she has been such an inspiration to me throughout my career, but also she played a major role in the development of NOTO.”

Her final painting, a portrait of Washburn University President Dr. Jerry Farley, was completed on September 27. In all, Drager completed 20 portraits, and unveiled them during the 10th anniversary celebrations of NOTO Arts District. For Drager, the choice of the NOTO celebration made sense both from a safety perspective (being able to be outdoors), but also as a way of celebrating NOTO’s impact on her life.

Drager has been involved with NOTO since its inception. Her career as a professional artist began synonymously with the beginning of NOTO. “It has been a beautiful thing to watch the Topeka arts community grow and thrive and NOTO has been a huge force in that growth.” The COVID pandemic wasn’t the first time that Drager had faced adversity in her career. “I think it is important to look for opportunity in things that we may perceive to be a negative in our lives. A lot of the time, it just means that it is time to move on to another phase of our lives.” After being laid-off from a good job in 2017, Drager did just that. She returned to Topeka and decided to pursue her dream of becoming a full-time artist. “There are always going to be things that are hard in our lives,” she notes,“…but we get to choose how we deal with that hard, so choose wisely.”

It bears mentioning that yours truly was fortunate enough to also be one of the individuals chosen to be featured in this exhibit. And Drager is right- she absolutely kept it a secret. It was a total shock, and very humbling, to receive the message from her that I was to be included in her show. Too often, we don’t stop and think about how our actions, big or small, can have an impact on others. I never knew or thought that my goofy thumbs up and cheesy smile would catch anyone’s notice, let alone a talented artist. But if there is anything good to come out of COVID, maybe it’s the time to reflect on the impact we have on others.

So where do you find your inspiration? And how do you share it with others?

Drager offered some advice in that area: “I think the first thing to do is look at ourselves and ask are we doing what we can to uplift our own lives, but then more importantly, ask how can I uplift those around me – our families, our neighbors, our communities. Take action. Go out into the world and find a group, a cause that you believe in and begin to help using your special talents. Once you do that you will find inspiration and inspirational people everywhere.”

We couldn’t have said it any better ourselves.