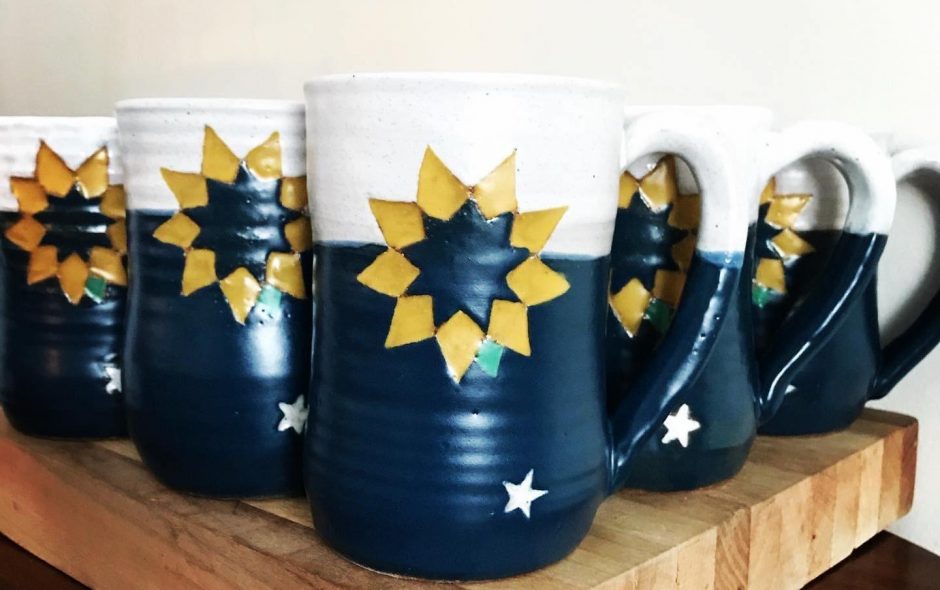 From coffee mugs to face masks, it seems that everywhere you look, Topeka’s new symbol of civic pride is popping up. Unveiled in 2019, Topeka’s new city flag was the result of hundreds of design submissions, and a public vote that saw more than 4,000 votes cast. The new flag is the manifestation of a city that has been on the move. So it’s not surprising that Topekans were quick to adopt the flag, and to begin incorporating it into their merchandise.

For Diane Horn, creator of Made Maker, a local handmade pottery business, the flag provided instant inspiration. “When I first saw the newly proposed flag I immediately loved it and thought it would look great on a mug!” Diane’s handmade coffee mugs featuring the flag design became a viral hit on social media.

“It has been so exciting to be a very small part of this movement of people who just really love their city and want to support one another.”

Diane wasn’t the only one eager to capitalize on this new wave of civic pride. Reliant Apparel, a custom clothing store in the heart of downtown, was eager to add flag apparel to its line-up of local apparel.

“The Topeka flag has become a beautiful symbol of our community, and we love seeing the happiness on our customers’ faces when they see the fun, stylish and functional ways they can wear the flag and show their pride,” said Chelsea Mann, lead graphic artist for Reliant.

Jenny Torrence, owner of Pinkadilly in NOTO, has been a long-time proponent for all things Topeka. Visitors to her fun and colorful north Topeka shop have long been able to find “I am Topeka” gear (in addition to other whimsical and downright hilarious clothing and apparel items). Items featuring the flag were a natural extension of her product line. “I not only love the excitement and pride that our city has for itself…we have such a fun flag to feature,” noted Torrence. “I am proud of Topeka…and want everyone to share our amazing city whether it be sharing our special highlights or wearing Topeka swag.”

One of the best things about finding flag swag around town is that almost all of it comes from local creators. Prairie Glass Studios, home to Kymm Ledbetter’s homemade glass creations, has been a staple of the Topeka art world for many years. Visitors can now find beautiful ornaments and other creations bearing the flag’s design.

“I support Topeka and stand strong in helping to make it a community I want to live in through my art,” Ledbetter noted. “…making Kansas themed ideas and products out of art glass is one way I can do this.”

Another local designer using the flag as her way of supporting the community is Laura Burton. Her online store, Meadowlark Graphics, has always featured fun buttons to show off your Topeka pride, in addition to a fair amount of other sassier flair. Laura’s store now not only features buttons but also fabric bearing the new image of the city flag. That fabric has been used to make one essential 2020 item- facemasks. Laura noted that the flag design lends itself to lots of fun layouts. “We love Topeka as a place to work, play, raise a family and run a small business,” she said. “This community has been very generous to us and we’re thrilled to be able to show our pride.”

The momentum of community change that launched the new flag’s design also inspired the creation of Clad Astra, an online clothing and apparel business with community activist S.J. Hazim at the helm. Clad Astra’s hats have been seen on top of some pretty notable figures around town, and in the wake of COVID-19, Clad Astra too has offered their own line of facemasks bearing the flag emblem. According to S.J., Clad Astra is all about “providing products and services that create engaging moments of pride and respect of our community.”

“When you feel pride in your community — at the neighborhood level, and the city level — you are more likely to work to make it even better,” she said. “The flag is meant to be a symbol of that pride.” For Michaela, seeing the flag appear in so many places “is like watching hope grow.”

One of the reasons the new flag design has been able to spread so quickly was the open source nature of the design. The design is not trademarked or otherwise legally protected. According to co-organizer Brittany Crabtree, this was a conscious choice during the design process. “Early on, when we researched what worked in cities around the country – it was clear we had to make the flag open source. We wanted this to be the people’s flag,” she noted. Brittany wanted to leave the interpretation and distribution of the flag in the hands of creative Topekans around the community, a choice she feels was a good one. “We’ve seen so many creative uses of the flag – no single organization could have created so many interpretations, in so little time!”

Whether it’s a small online business or downtown staples, it’s clear the new Topeka flag design has captured imaginations across the community.