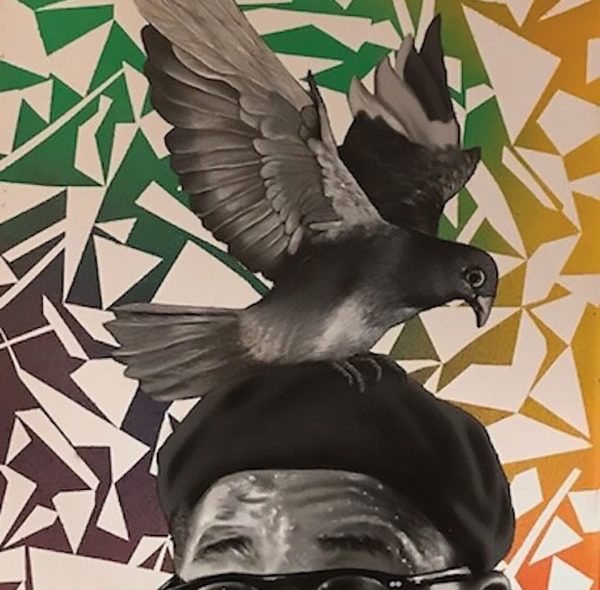 It’s just all off the top of the dome, man. I don’t think about anything I do at all. I don’t think about shit. I just do it.” Patrick Rocha, says this in reply to his portraiture, pieces that are a remarkable and often surreal reflection of their subjects. His work is an apt parallel to the last 20 years of his artistic life – a compilation of refractions fed through a lens of personal history, curiosity and subversion.

He was exposed to visual art at an early age. His father, Patrick Rocha, Sr., was a courtroom artist and painter. He was also a freelance illustrator, taking odd jobs as a means to provide for Patrick and his two siblings.

Rocha began his own journey in visual art with graffiti when he was 13. He and his brother Luke Rocha, also a noted visual artist, had an itch for running against the current, designing their own clothes and embracing punk as ethos and praxis. “I didn’t give a shit about academia. My brother and I went and wrote (graffiti) in tunnels. I eventually graduated to painting trains,” he says. It resulted in his work being published in numerous graffiti magazines by the time he turned 16. However, he quickly grew disenchanted with graffiti culture and its territorial nature.

He received a scholarship and was accepted into Pratt Institute, a private university in Brooklyn, NY. when he was a junior in high school. He went there for three years. “I had amazing professors. People knock college but I actually learned a lot,” Patrick recalls. Rocha’s environment agreed with him, a curation of art-school misfits that suddenly and serendipitously had a place to belong. “It’s kind of impossible (for it) not to,” he states. “The most important part of my life is when I turned 17 and my parents let me move to Brooklyn. Everyone was a graffiti writer. I wasn’t alone anymore.”

He also recognizes the unique and contentious position that he was in as an expat on the East Coast. “I began working for J. Walter Thompson on Madison Avenue,” he remembers. “I worked there for a year before I almost wanted to throw up every day. I was making a lot of money at 28 years old but it’s like selling your soul to the devil.”

He drew from his counter-culture experiences to help keep him engaged in his advertising work. “The wild stuff I did with my friends influenced the corporate work I did. When you graduate from art school, you don’t wanna be an ad guy. You wanna be in galleries. You don’t wanna be writing copy for an airline company. I can’t knock advertising but (I wanted to focus) on my art.”

Patrick left New York and after he spent a few years in Los Angeles decided that he would come back home to Topeka in 2017. “Members of my family needed me,” he shares simply. “I was supposed to be here for three months and it turned into three years. I’ve made so many friends in the time I’ve been here. I love it here.”

“I have my studio and my cat. I’m making books and doing paintings. I’m still freelancing. I’m just doing what I do.”

In 2018 Rocha, his brother Luke and Rocha Sr. had their first collaborative gallery show at The Jayhawk Gallery titled “Dateliners.”
Patrick’s re-acclimatization to the Midwest was encouraged by ArtsConnect, among others, whom he gives gratitude for their support and opportunities.

View more Patrick Rocha art, purchase or inquire about commission pieces or just drop a line to say hi, all at PatrickRocha.com 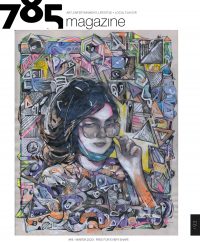