Sunrise Theatre Co.’s debut performance was staged and filmed at ArtsConnect, the first theatre production of its kind in this NOTO district art space. The production will be delivered to ticket holders virtually either Friday or Saturday night. Guests may watch on their smart tv or web device.

Adding a complex layer to this inaugural production is the video recording in and of itself. The production was done by Create/Uplift; balancing stage mannerisms that actors sometimes use to exaggerate on stage with up-close camera angles was done lovely. Devoid of audience energy, I was impressed by the live stage acting; no energy was lost for the audience. In fact, the opportunity for some up-close views was unique and welcomed. Unfortunately there were times during wide-shots my attention was drawn to the fabulous artwork in the background that is ArtsConnect. This may not have been the case in person. It’ll be interesting to see how this partnership progresses via live productions come Fall. I can only imagine this production revisited five years from now, perhaps with some enhanced lighting gels. Overall, it’s a fine community production and I am eager to see how the company hones skills and grows through the seasons. I believe the creative energy the ArtsConnect space brings will be harnessed and allow for a very intimate in-person setting for progressive and forward thinking plays, such as “The Realistic Joneses.” It was good stuff.

The show, which was on Broadway in 2014, is an absurdist, awkward, humanitarian show at the core. Our American society at its most adorably awkward with a dash of illness and wit. Two couples, with the same last name, are doing the whole “get to know one another” dance while internally navigating the affects of learning that your partner is no longer your partner in the way they once were. It’s a modern play about nothing, and everything. A subdued “Seinfeld” or new take on “Waiting for Godot” by Samuel Beckett.

“It’s weird, you want this conversation to end but I want it to keep going.”

I appreciated the simplistic, purposely set design and prop use. A picnic table serves to announce it’s time for a scene change; the wine bottle became a fifth character at times (and golly did I wish it was opened).

You’re going to see a lot more from Sunrise Theatre Company in the future and Nathan Short has set the stage and tone for bringing progressive theatre works to live theatre in Topeka. This premier production will inspire more to get involved with Sunrise.

Sunrise Theatre Company’s debut is May 7 + 8 with the production of “The Realistic Joneses” by Will Eno. The production was staged at ArtsConnect located in NOTO, the future home of their in-person productions and filmed by Create/Uplift. The virtual stream is delivered by seveneightfive magazine and ArtsConnect. Tickets are $10. 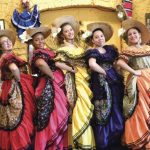 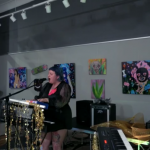